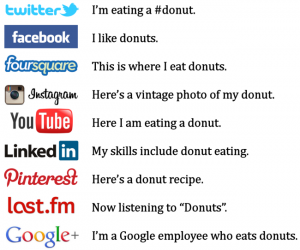 Between generation X and Y, tweets and statuses, we are inundated with ways in which to socialise with our peers. Often confusing and frequently frustrating, social networking is often the peril of even the most technically gifted teenager. With this in mind, we at Gatsby provide a humorous and – hopefully – insightful means of navigating the online pitfalls.

View this as the social networking equivalent of bread and butter. With over one billion users, use it to connect with friends and family. But with such popularity comes many drawbacks. Between adverts for the latest phone contract and assorted dating websites, Facebook has previously been used to screen candidates’ private lives during the job application process. Users update predominantly update their status and privately message friends and – lest we forget – give specific items the proverbial thumbs up by “liking”. The spectacularly dismal share price after three months of its initial public offering tells us what the real value of this social network is.

140 characters are the key here. Users follow others and post “tweets” restricted only by their length – this sounds obtuse, although we’re startled at what some users have managed to produce. Such is the vitriolic extent of some content spouting from Twitter our own Attorney General Dominic Grieve has had to warn about the consequences of posting abusive tweets. Grievances aside, Twitter has changed the way the media operates. News is increasingly broken online as users create trends around hot topics of conversation. Having cottoned onto this potential, we can now follow news outlets including the BBC and Sky. Oh, and watch out for “Beliebers.”

The days of mocking that friend who set their camera to sepia are over – Instagram allows us to snap and share photos by uploading them to a personal account. A more sentimental way of interacting with the family, it’s a great method for us to share holiday photos with loved ones as we sip a drink at the beach bar. Complete with tools to transform and change photos, it has become an essential tool for the photographer on the go.

This smartphone social networking application allows users to “check-in” to specific locations and link up with friends in the process. Checking into different venues earns users points, creating a means of reward and enforcing a positive social community. Continued reliable feedback for instance can lead to users being selected Four Square staff to become part of governing body. For those who have a usual haunt, there is the ability to become “mayor” of a certain location. Just be sure that you don’t inadvertently check-in at anywhere less savoury.

Undoubtedly one of the greatest – and most dangerous – internet innovations, Youtube is now one of Google’s many assets. Allowing users to upload videos for the world to see, the term “viral” was coined from a seemingly mundane video uploaded receives millions of hits in a very short amount of time. We mentioned Youtube was dangerous – it is frequently the source of office-based procrastination. We were surprised at the number of cat videos that have been uploaded, despite their lack of opposable thumbs.

What is great about this particular programme is that it both allows users to listen to unlimited amounts of music for free, but also combats music piracy at the same time. Every so often it requires the user to listen to some adverts, thus injecting some revenue into the operation, but aside from that it is beautiful simplicity. Click to listen. Click and drag to create a playlist. This can then be shared with friends, so they can either marvel at your musical brilliance or condemn the numerous Craig David plays.

Sharing images with other like-minded individuals, users create a virtual “pinboard” that can then be subscribed to by others. Pinboards are usually organised around specific themes, e.g. fashion. We found that upon signing up for an account we spent a considerable amount of time trawling through notable names in menswear. This can be quite useful for compiling a scrapbook for later – when roaming about on our mobiles we often don’t have the potential to note down everything. Pinterest means that any sudden brain activity isn’t destroyed by the morning commute.
When Shakespeare coined the term “too much of a good thing,” four centuries later it rings as true as it ever did. It is now possible to connect to that uncle in Australia and the friend travelling in Peru, but err on the side of caution when publishing personal information. The number of cautionary tales that we’ve stumbled upon when researching this particular post has been staggering.
Also, on another note – remember that these are social networks. The fountain pen and leather-bound notebook is infinitely more masculine and professional when it comes to the workplace.
Tweet

Sartorial Elegance of the Marlow Regatta

A Streamlined Guide to Social Networks

Between generation X and Y, tweets and statuses, we are...

A Truth About Denim

We all know that six months is far too long...

Caring For Your Shoes

We can all admit to the sensation we experience when...

Very excited about the new Summer collection.... What do you...

In 2006, two renegade designers sought sage council from a...

It's Time To Plan Your Summer

The Met Office says Britain is odds-on for a great...